Black Lagoon originally aired back in April of 2006. The series revolves around Rokurou Okajima an unassuming Japanese businessman who’s bland unfulfilling life is leading nowhere. Then one day whilst out on a business trip his ship is hijacked by a group of pirates going by the name of Black Lagoon. The pirates, for better of for worst, take him as a hostage. The crew of the Black Lagoon, along with Rokurou return back to Roanapur. A Taiwanese city of blood and money. Rokurou attempts to contact his superiors back in Japan but rather than attempting to rescue him they decide to cut ties and leave him for dead. Reluctantly Rokurou realises that his only chance of surviving in the city is to remain with his ex-captors and so he decides to tag along with them. In an unforeseeable move, Rokurou ends up joining the Team of the Black Lagoon assuming the name Rock.

My Review: For thoes of you who have seen some of my recent posts you will know that I did a full review of the entire Black Lagoon Manga series so far. (For those of you who haven’t, you can read the fist volume here). After finishing the manga series I decided I was going to watch the anime. The show itself is quite good though If you plan on watching the dubbed version then the recording quality seemed a bit low quality. In terms of art, the environmental scenery is beautiful, especially that of the oceans. However, I personally thought that the character drawings were rather basic with very dull or muted colours. The plot is quite good with some really fun plot points. Howeved, It felt like the passing was a bit rushed, jumping from each mission with no real ties between them.

Black Lagoon volume 10 was illustrated be Reu Hiroe and was published on 19th of May, 2014. This volume features the next eleven chapters (77-87), read the review for the ninth volume here. Benny’s Girlfriend Jane, returns to Roanapur for the fist time since her incident with the counterfeit money plate. She has recruited Feng Yifei, an undercover Chinese spy. Jane tasked her with the job of hacking into a German defence organisation to retrieve some data, however, Jane’s real intention is to use Feng as a tool to blackmail the Chinese Government. The People’s Liberation Army can’t allow Jane’s attack to interfere with their operations, and so they are forced to hire the local mobsters of Roanapur to hunt down and kill Feng. She runs to the only person she has any connections to in Roanapur, Rock. As a result, the crew of the Black Lagoon get pulled into the firing line of her pursuers.

My Review: After the chaotic madness that was the El Baile de la Muerte arc, the light-heartedness of this volume was quite refreshing. To me, this volume felt somewhat isolated from the previous volumes, It does bring up the ending of the Roberta arc, however, it just has a different tone and atmosphere to it. As it stands at the moment I really like Feng as a character, she shares an almost identical story to Rock at the very beginning. This volume explores the technological side of the underbelly world, which is something Black Lagoon hasn’t really looked at before, it’s not a big part of the volume but I still thought it was interesting. One thing that stood out to me was how Jane’s character seems to have changed into the enemy, this could lead to some sort of divide between the crew of the Lagoon in future volumes. 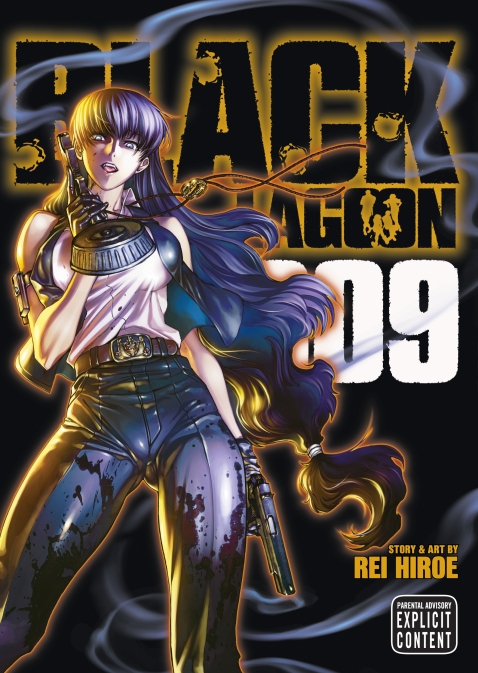 Black Lagoon volume 9 was illustrated be Reu Hiroe and was published on 19th of October, 2009. This volume features the next twelve chapters (65-76), read the review for the eighth volume here. Roanapur is in a state of chaos as Roberta’s assault reaches its climax. Balalaika and Hotel Moscow’s prestigious assault team rain hell down upon Roberta, The U.S. military and the crew of the black lagoon, from the rooftops of Roanapur. All the while Garcia Lovelace, Revy and the rest continue their pursuit of Roberta but all the while she slips further out of their hands. Garcia confronts the U.S. soldiers who murder his father, and he must make the choice whether revenge is what he wants. All the while Roberta continues her decent into madness, falling further away from the life she is fighting to protect.

My Review: This is the longest volume in the entire series so far which is pretty cool because it means that we get to see the end of this massive arc in one big collection. This volume really strays from the main characters, as a matter of fact, Rock and the rest of the crew are barely in it, mostly if just focuses on Garcia Lovelace and the U.S. operatives. Garcia really solidifies his role as a character in the series, when we first met him back in volume 1, he was more of a throwaway character but now he seems more like one of the main characters. There is also a lot of character development for the U.S. soldiers, mainly the Major. On thing that made this volume really tried to drive home was this strong sense of duty and how each side is neither good nor evil, which I really liked. I though this volume does a perfect job of neatly wrapping up the arc and would also work really well as the series finale. 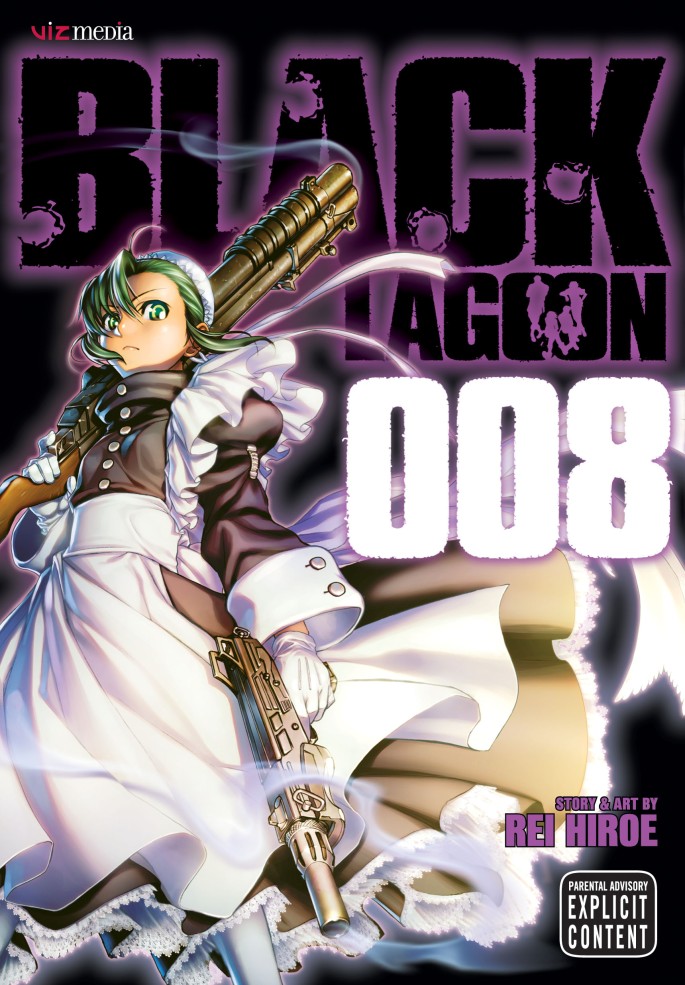 Black Lagoon volume 8 was illustrated be Reu Hiroe and was published on 19th of July, 2008. This volume features the next nine chapters (56-64), read the review for the seventh volume here. This volume continues the story of Roberta’s Manhunt. To aid them in their mission, Rock and Revy have enlisted the help of a few old friends, however, they are running out of time and every man and his dog are on the hunt for the “Bloodhound”, The team arrive at an all out bloodbath, Roberta is facing down with the U.S. military black ops unit and the NSA and CIA aren’t far behind. With so much on the line, it is not long until the local gangs get involved with Hotel Moscow mobilizing their units into position to start the all out war that will leave Ruanapur decimated.

My Review: If you read my review on the last volume you will know that I said I fount it to lack much action, this volume certainly makes up for that. Pretty much the entire book is just centered around one big fight that’s raging through the streets. We get to see some nice action and the reappearance of Shenhua and Co. One Issue with the face paced action is that it can sometimes get confusing what was actually happening, partially due to the illustration, this was also because there was just so much happening in different places that it was hard to tell which faction was which. My favorite part of this volume is just before the end, It’s when Garcia Lovelace (The Young Master) confronts Roberta and she has a complete mental breakdown and starts yelling at a hallucination of someone she killed in her past.

Black Lagoon volume 7  was illustrated be Reu Hiroe and was published on 10th of October, 2007. This volume features the next nine chapters (47-55), read the review for the sixth volume here. Roberta has gone awol and is hiding somewhere in Roanapur. She is killing U.S. Military operatives who are associated with the booming of the late Lovelace master. This is sending all the local gangs into a fit knowing that too much attention from the U.S. would be devastating for the lifestyle of the residents of Ronanapur. Garcia Lovelace has traveled to Ronanapur with his maid Fabioa in searcher of Roberta. He appeals to Mr. Chang of the Triad and the Lagoon Traders to aid him in his search, however, knowing the risks both groups are reluctant to accept. Rock, sharing compassion with younger children decides he will help them but he will need to convince the rest of his crew if he’s going to have any chance of success.

My Review: This is not meant as a criticism but I think that this arc is really taking its time to kick off, there is just so much build up that I’m starting to lose interest, I really hope that things pick up soon. For this volume, in particular, there was have very little action at all with only a short firefight at the start and the rest being mostly political stuff. Probably my favorite moment in this volume was at the start of chapter 54 where we see one of Roberta’s rare appearances but it depicts her going insane, probably from over medicating, we also get to see her sporting a new outfit in the final panel of the book.