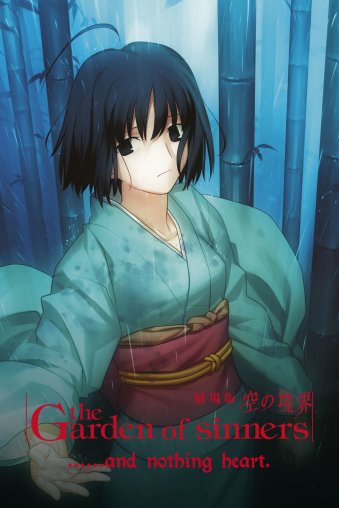 The Garden of Sinners Chapter 2: Murder Speculation Part A is the second movie in the Garden of Sinners series, You can read my review of the first movie here. This chapter was released on the 29th of December, 2007. Murder Speculation (Part A) takes place during 1995, more specifically, during the time when  Mikiya Kokutou and Shiki first meet. Kokutou first meets Shiki whilst taking a midnight walk, first caught by the sight of her stark white kimono. Later that year, Kokutou recognises Shiki as one of his class members and takes it upon himself to befriend her, and as the two grow closer Kokutou start to learn about her past and the reason for her uniqueness. While all of that is happening, the city of Mifune is besieged by a series of brutal murders that would all appear to be interconnected. Thank to the fact that his cousin in a detective investigating the case, Kokutou is privy to some information that may shift his view on his situation.

My Review: After the more action oriented Chapter 1, Chapter 2 takes a more story driven perspective, however, we still get a nice little bit of action towards the end. In it, we get to see the establishment of Shiki and Kokutou’s relationship, as well as get to learn about Shiki’s past and the reason for her Male/Female personality swapping. For the most part, this chapter is just a lot of dialogue, which isn’t a bad thing, however, it did get a bit overbearing towards the end. The visuals are just a vibrant and stunning as the first, with some contrasts of grey, bleak moments. Despite the elaboration on Shiki and Kokutou’s characters, this is where we start to see the emergence of my biggest issue with this series, being the lack of information. The is just so much information which we are not given (until later chapters), and I found that it makes the story somewhat convoluted and hard to follow. Regardless of that fact, I still think it is an excellent way to tell a story, perhaps, in this case, we may have needed a little bit more context. Never the less, The Garden of Sinners Chapter 2: Murder Speculation (Part A) is an excellent continuation of the series.

One thought on “The Garden of Sinners Chapter 2: Murder Speculation (Part A) Review”